Friends of Legion State Park was founded as an independent, nonprofit 501(c)3 organization, dedicated to preserving and maintaining the Park through volunteer work and fund raising. Friends of Legion State Park hold general membership meetings in the historic lodge at the Park. Programs, fundraising ideas and projects to aid the Park are part of the Friends itinerary. To become a member, contact any of the following members, ask park personnel or contact us by email at


Since 2004, an organization made-up strictly of volunteers has been instrumental in preserving and improving the facilities of Winston County’s treasured Legion State Park. Aptly named “Friends of Legion State Park,” the group meets regularly and raises money and devotes time to helping the park succeed when funding and staffing by the State have been difficult.

The history of the group’s formation and its efforts has been journaled by one of its founding members, retired registered forester Kline Shepherd. Shepherd, an octogenarian, recalls his being led to become involved in the parks’ restoration as being nothing short of ‘divine intervention.’ He reverently describes the many successes that happened as the group was being formed which he says simply can’t be explained by any other means and speaks fondly of the commitment that all the members of Friends displayed as they dutifully took-on their responsibilities.

Another group of members (who best can be described as “baby boomers”) has equally fond and lasting memories of the park from their youth when the park was leased by the State of Mississippi for more than two decades to the Pushmataha Area Council of the Boy Scouts of America. Known during that time as “Camp Palila,” annual camporees and summer camps were held at the park. Rustic log cabins, camp sites, two lakes and miles of hiking trails made lifelong memories for hundreds, if not thousands, of young boys. Espousing one of the many Boy Scout virtues, the camp was frequently ‘loaned’ to the Girl Scouts enabling them to also experience the park’s perfect attributes needed for camping and helping mold young lives.

The members of Friends of Legion State Park come from diverse backgrounds and ages, but clearly the core members (at least those who helped form the organization) have a fondness for the park that is steeped in rich memories.

From reopening abandoned nature trails, planting wild flowers, selling annual access passes (which are honored at all state parks), developing butterfly gardens to helping host one of MDWD&P’s annual fishing rodeos, Friends of Legion State Park began making its mark on the routine operation of the state park. Their first major project was in 2005 when volunteers completely restored the A-frame chapel that overlooks one of the park’s two lakes. And, with a determined effort, they did so in time for that year’s community Easter sunrise service.

In 2014 the Friends undertook its most ambitious project since the organization was formed. One of the truly unique structures built by the CCC is an open-air picnic pavilion. The structure featured a stone floor bordered with a two-foot sandstone and mortar skirt and a vaulted ceiling of hand-hewn, hardwood rafters and joists supporting a shingled roof. In the back of the pavilion, a three-wall inset with a stone fireplace provided a cozy environment on chilly fall and winter nights. The only known photograph of the original pavilion is a vintage postcard found at the Mississippi Department of Archives. (below) 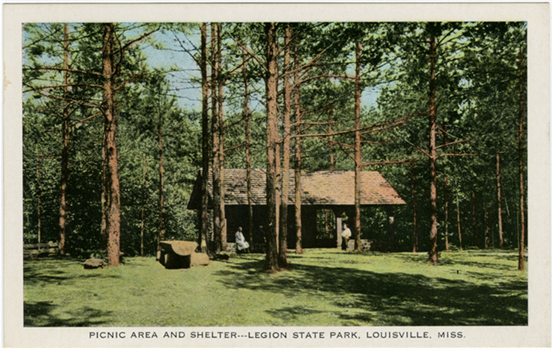 Over the span of a half-century, the pavilion was exposed to the grueling elements of harsh winters and the parching summer sun – even the howling winds of Hurricane Katrina when her eye passed directly over Winston County in 2005! Unfortunately, the original wooden structure eventually collapsed leaving nothing but the stone floor, the sandstone masonry skirt, and the stone chimney seemingly standing as a stark memorial to the toil of the CCC in the 1930s. It simply was not acceptable to Friends of Legion State Park for this wonderful structure to not be restored. . . so they set their sights on doing just that!

As it had on many occasions since its inception, The Friends organization called upon Kline Shepherd to lead the group’s effort in pursuing the project. Friends’ member Bob McWhirter drafted construction plans and meticulously followed the original CCC design. The vision was clear, the plans were off the drawing board, and all that was now needed was the determination and funds to see it through to completion.

Other members of the Friends organization began working with the Mississippi Department of Archives and History and soon secured a “Historic Landmark Preservation Grant” for up to 80% of the cost of restoring the historic pavilion. (The pavilion is not only designated by MDAH as a Mississippi Landmark but, along with most Legion Park structures, is listed on the National Register of Historic Places by the US Department of Interior.) Shepherd approached Davis L. Fair, III and his sisters about the project and secured a commitment from their families to contribute the MDAH required 20% matching funds as a memorial to their father, Davis L. Fair, Jr. Mr. Fair was an instrumental Winston County industrialist and philanthropist who had an endearing love of the park. Additionally, Shepherd secured numerous, significant gifts from other interested entities in the community to help finalize the project. 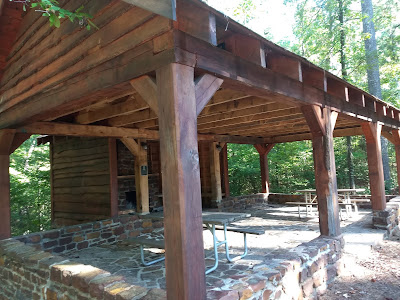 
In November 2014, the pavilion was reopened and permanently designated by the Mississippi Commission on Wildlife, Fisheries, and Parks as “The Davis L. Fair, Jr. Memorial Pavilion.” A large crowd attended the ceremonies including members of the Fair family and numerous state and local officials. In remarks at the dedication, MDWF&P Executive Director Dr. Sam Polles pointed out the significant role Friends of Legion State Park had played since its inception with this and other projects supporting the park.

Even before the restoration project was completed, Friends of Legion Park identified another significant need relating to the pavilion. Repairing restrooms originally located under the pavilion was found to be cost prohibitive and simply not feasible given today’s environmental requirements. Not to be deterred, the Friends began setting their sights on adding the much-needed restroom facilities somewhere near the pavilion. In 2016, again led by Shepherd, Friends of Legion State Park secured and provided funds for construction of a handicap-accessible restroom facility directly across from the pavilion.

An added benefit is the restroom’s close proximity to the park’s nature trail. The architecture follows the same design as the picnic pavilion. Sandstones left on the site in the 1930s by the CCC were used to build the signature rock skirt that surrounds the entire structure. Large support columns and lapboard siding were sawn from native hardwood trees grown only a few miles from the park.

Friends of Legion State Park president, Bernard Tabor commented on the role of the organization. “There is a reality among our members that with declining revenue at all levels of government, organizations such as ours are often needed to join arm-in-arm with our governmental agencies to help preserve those things that are as special as our park. Without such a willingness to help ‘tow the line’, we will have no one to blame but ourselves if less than desirable consequences present themselves in the future.”

The 435 acres that make up Legion State Park are maintained by a meager staff of park manager Tim Flake and one other employee. Clearly, there is no one better to assess the importance of the Friends organization than Flake who observed, “I love my job. This park is as fine an offering of Mississippi’s beautiful landscape as we have in our park system. It is such a great help to have a group of volunteers who are willing to give of their time to help keep our park open and for it to always be found as a place of natural beauty for our many visitors.”

Jennifer Head, Director of State Parks for the Mississippi Department of Wildlife, Fisheries, and Parks echoed Flake’s sentiments. “Our agency has the daunting task of managing 25 state parks from the Tennessee state line to the gulf coast and from the Mississippi River to the Alabama state line. We strive every day to be diligent with the funds we receive from the Legislature and from our patrons to operate our parks. We are blessed to have these funds and strive to be good stewards of these resources. Having an organization such as Friends of Legion State Park directly impacts our ability to provide our citizens and out-of-state guests with as fine a state park as can be found anywhere in the country. Our relationship with them can accurately be described as a model of cooperation between government and the public.”

In addition to the restored picnic pavilion, visitors to Legion State Park will find numerous other covered picnic tables with permanent barbeque grills, a campground for RVs, a tent campground, rustic log cabins available for rent, a lodge with a large meeting room that is also suitable for family reunions or wedding receptions and the like, an open-air chapel for religious retreats or weddings, two lakes stocked for fishing, a playground and a one-mile nature trail that surrounds the larger of the two lakes. The park is located inside the city limits of Louisville on North Columbus Avenue and is a short, 30 minute drive from Starkville and Mississippi State University. For more information visit https://www.mdwfp.com/parks-destinations/ms-state-parks/legion.aspx or contact the park directly at 662-773-8323.

And, anyone interested in being a part of Friends of Legion State Park and helping with its many ongoing projects or in purchasing a $42.00 annual entrance pass that is valid at all 25 of Mississippi’s state parks should contact Kline Shepherd at 662-773-5289 or any of the group’s members. Friends of Legion State Park has been designated by the IRS as a qualified 501(c)(3) charitable organization enabling contributions (including memorial/honorarium gifts) to be itemized as a charitable contribution for income tax purposes.