by Ron Gammill.....
Many of you who grew up in Louisville during the early sixties will likely remember the name  -

Bonzy Darden. You might remember "Bonzy Darden and the 4-Ds" playing for some of our junior high dances. Several of us who were getting interested in rock n' roll and playing guitars & drums, and even starting a little dance band, remember Bonzy very well. Bonzy, along with four of his sons, had a Rhythm n' Blues Band ... a Soul Band if you will, that played for our local dances at the VFW and Armory. Bonzy was playing the bass guitar; the youngest son (if my memory is correct) was on the drums; another son on guitar and an older son doing the vocals. It was great! You name the song and they could play it!

Bonzy and his sons were not only excellent musicians, but were very generous in many respects. For example, I don't remember doing a lot of dancing at those events because I was far too busy trying to figure out how that lead guitar player was playing those chords and moving up and down the guitar neck with such ease. I can still see Bonzy's smile as

he played and watched me trying to learn a new lick or two. It was always an encouraging grin. After getting to know Bonzy and his sons, and learning that they often practiced in the evenings after Bonzy got home from work, several of us would casually drop by to listen to their practice sessions. Bonzy and his wife were always welcoming to us. It was a great time for us aspiring young musicians. We heard the records on the radio or TV, and would go by Bonzy's practice sessions to watch the 4-D's, with great ease, play the songs we were so hungry to figure out.

Fast forward to Louisville's 2019 Red Hills Festival. I had an unexpected reunion with three of Bonzy's daughters (left to right), Tawona Hickman, Annette Jernigan and Linda Miller. Tawona is the youngest of the Darden

sisters and arrived on the scene a little too late to have performed with the 4-D's, and Annette was just a toddler during the time of the 4-D's. Linda Miller was a part of the group when she was about 10. Another sister, Lee Smith (pictured below), was a member of the group at age 14. As the girls married and left Louisville, Linda became the female singer of the 4-D's and at one time the group advertised themselves as The 4-D's featuring "Little Linda". Bonzy was also a marketing genius!

Linda remarked, "when Ron asked us to sing at the Legion Park Music Festival we decided to "polish up" our singing to honor and represent our Dad, with some Gospel Music."

Now the musical reach of Bonzy Darden does not stop here. The Darden

Sisters will be accompanied on the organ at the Festival by Jeremy Jernigan, Annette's son and Bonzy's grandson. Jeremy recently graduated with a degree in music from Mississippi State University. Bonzy has just got to be smiling!

Reminiscing, Linda remarked, "We were all probably running around the house when Ron Gammill and his friends were visiting in our home with Dad and my brothers. Our oldest sister Shirley, who now lives in Indiana, was also part of the 4-D's 'back in the day'." Bonzy had six daughters and six sons. Some were a part of the 4-D's and some weren't. The one thing for sure, the house was always full of music.

Be sure to come out and hear The Darden Sisters with Jeremy Jernigan Saturday morning at the CCC Lodge at the Legion State Park Music Festival. 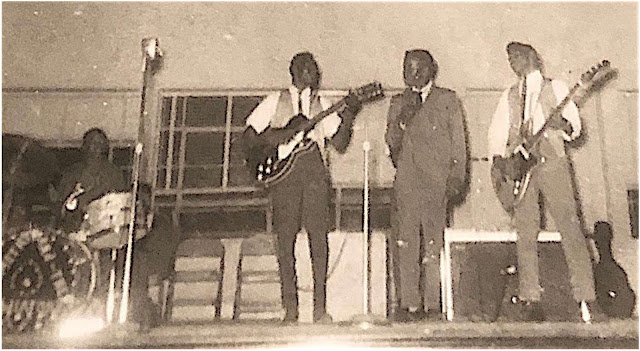